5 TIPS ON HOW TO ZERO THE RIFLE

5 TIPS ON HOW TO ZERO THE RIFLE

The summer season of deer hunting is coming and in some regions it has already begun, so it is time to ask yourself how to zero the rifle.

As soon as you leave your trusted armory with the Horizon bolt action under your arm, there is only one destination: the shooting range. But how to zero the rifle?

Every hunter knows that, the first session at the range before the opening brings with it particular charm. A mixture of excitement and anticipation for the coming season.

The desired one is obviously one when it comes to bolt action hunting rifles. Let the shot go exactly where the mind and eye would like it to go.

But you know, there’s always a gap between desire and reality. And maybe, after all, it is precisely that necessary effort, that never having anything taken for granted, that contributes to the satisfaction of a good shot scored.

It is thus necessary to zero the rifle according to your personal use.

First of all, a premise is a must. There are several ways to zero the rifle, depending on the conditions in which a hunter or shooter is located and the instrumentation available.

But the first rule is: start from the ground up.

Gradual progress is essential, both when hunting and at the shooting range. When handling a firearm there are no time wastes or shortcuts.

The aiming scope is, in addition to the bolt action rifle, obviously the selective hunter’s greatest ally.

To zero the aiming scope, the two adjustment turrets are used, which rotate to the right or left to move the internal reticle.

The turret on the top of the scope allows you to adjust the height of the shot, while the one on the side deals with the drift adjustment (right-left).

The task of these turrets is to move the reticle of the scopes, so that it matches the point you want to hit.

Here are some useful tips on how to zero the rifle before using it on the hunting field.

How to zero the rifle: fit the scope in a workmanlike manner

Whether hunting or shooting, it’s often the details that make the difference. Therefore, even at the cost of appearing obvious, the first and fundamental step to obtain a correct calibration of the firearm is to mount the scopes in a workmanlike manner.

It is important, in fact, to pay maximum attention so that the base and the rings are perfectly in axis, as well as the reticle of the scopes, which must be perpendicular to the bolt action.

This is because, if not, when the reticle is adjusted with the turrets it will tend to move diagonally.

In addition, the scope must be at the right focus.

The ideal environmental condition is in the absence of lateral wind, as this would shift the blow. 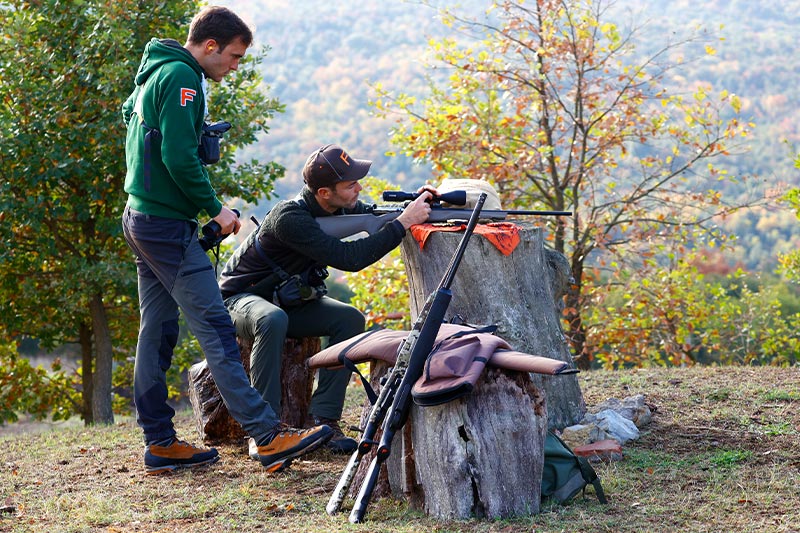 How to zero the rifle: step by step

If possible, when calibrating the scope it is advisable to make some preliminary tests at close distances – from 25 to 50 meters – using a large target.

It is not advisable to start from 100 meters, unless you have to. This is because you could risk not hitting the target at all, making it impossible to figure out how to move the turrets.

At this point, always keeping the rifle stationary in the position of the targeted point, the simplest and most effective operation is to use the two turrets to move the reticle perfectly over the shot that hit the target.

A second shot will make it possible to verify that the fore-end iron and point of impact are overlapping.

Only then, the time will come to zero the rifle to 100 meters, firing a pattern.

How to zero the rifle: boresight

If for any reason, due to the location where the rifle is zeroed or other reasons, it is not possible to fire close shots within 100 meters, a good practice is that of the so-called boresight.

The boresight can be done “roughly” or with the help of a laser (boresighter), equipped with a laser beam coaxial to the barrel.

First, remove the bolt and, without moving the weapon, look inside the barrel, so as to align the target at its center. At the same time, check that the reticle is adjusted to the same point where the barrel aims at.

It will be necessary to carry out some checks, until you get a perfect overlap between the point targeted by the barrel and the reticle.

“The 100 meters”. It is a phrase that always has a particular charm in the imagination of sports enthusiasts at every level.

Perhaps it is the only competition that has managed to go beyond sport and occupy a place in popular culture.

The race that is done all in one breath holding your breath, the one that even grandmothers of other times looked willingly because it sanctioned who was “the fastest man in the world”.

Obviously, this is not the case, but also to zero the scopes of a rifle the 100 meters are a real must.

Once at this distance you will have to make a pattern.

The right ball weight for the barrel rifling of your bolt action will be chosen, as well as a suitable load.

If in most cases you get good grouping, but sometimes a shot goes out of place, it is likely that at the time of the shot the bolt action rifle is unbalanced.

A tip: to zero the rifle it is ideal that it is in axis at the time of shooting, therefore as much as parallel to the ground, so as not to incur errors due to the angle of site.

It is also important to let the barrel cool down after a few shots, because the heat is in this case our enemy and the thermal expansion will tend to widen the patterns and slightly shift the point of impact.

How to zero the rifle: learn more about your bolt action

Shoot, shoot, shoot. Only by thoroughly knowing your bolt action rifle will you have the affinity necessary to zero the scopes of the bolt action in a workmanlike manner.

So, all you have to do is take your own Horizon, start the engine, go to a firing range destination and prepare the largest ally we have, to live intense hunting experiences.