Wood pigeon hunting: what are the best hunting methods and cartridges?

Home/Franchi News/Wood pigeon hunting: what are the best hunting methods and cartridges?
Your Franchi

Wood pigeon hunting: what are the best hunting methods and cartridges?

Wood pigeon hunting mainly happens in three ways, each of which requires the careful choosing of the shotgun and cartridges to be used, which may vary according to the contexts and hunting scenarios.

Wood pigeon hunting is a passion that must be borne within. Requiring absolute dedication, is not a hunt that may be termed “easy”.

Being a hunter is in itself a distinctive trait that defines a person – but being a wood pigeon hunter represents a true lifestyle.

The commitment is not over at the end of a day’s hunting but lasts 365 days a year. Wood pigeon shooting is a hunt-built day after day, with the meticulous preparation of every detail.

Everything has to be perfect. This is because the wood pigeon is a difficult, wary game bird with an incredibly acute, almost proverbial, vision.

Also known as the culver in southeast England, while its scientific name is Columba palumbus, the wood pigeon is a migratory bird found throughout Europe. Generally speaking, the wood pigeons contingents originate come from the north and north-east, so from eastern Europe, to migrate towards the south and south-west.

October is the month of choice to bag this game bird which, thanks to its great spirit of adaptation, may easily even become a permanent fixture, especially in central Italy between Le Marche, Umbria and Tuscany.

Its bluish grey plumage is tinged with shades that go from pink to green on the sides of the neck. A medium sized game bird, it has a powerful shape compared to its peers.

The thick layer of feathers acts as a real protective barrier, making the choice of shotgun and cartridges for bagging it very important.

What are the main wood pigeon hunting techniques?

Wood pigeon shooting can be practiced in three ways: as mountain pass hunting, tree stand hunting and field hunting on the ground and from hides.

They are all stalking hunts, with particular and different characteristics from each other. Mountain pass hunting is very vertical, upland hunting, requiring a deep knowledge of the orography of the place. 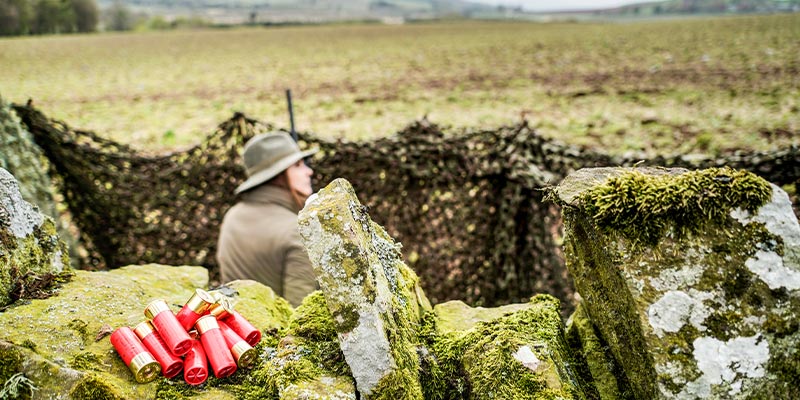 Commonly called “the pass”, this hunting activity requires hunters to position themselves in the mountain passes where wood pigeon migratory routes pass by, waiting for the thrills that will arrive from the sky.

Tree stand wood pigeon shooting is one of its most appealing formats. Platform care is meticulous in every detail, from the cleaning of the undergrowth to allow the easy recovery of shells and wood pigeons, to the pruning of the trees, to make the setting clearly visible.

It is a very convivial form of hunting, made up of waiting, moments of relaxation with your companions and all hunt participants being in complete harmony… a true orchestra of instruments perfectly in tune with each other!

Nothing is left to chance: from the perfect camouflage of the tree stands and hunters to the skill of flyers and decoys – the true stars of this hunt – which have the task of attracting wood pigeons towards the setting.

In tree stand hunting, the sight of the decoys in flight amazes and thrills the hunter who trained them in the preceding months, every single time.

The third type of wood pigeon shooting is from blinds and from ground-level hides. Often carried out near large, tree-lined rivers or fields of corn, wheat and soya, it requires careful camouflage.

Using live or motorized decoys, wood pigeons are attracted to the field, as long as the blind is well camouflaged within the environment. 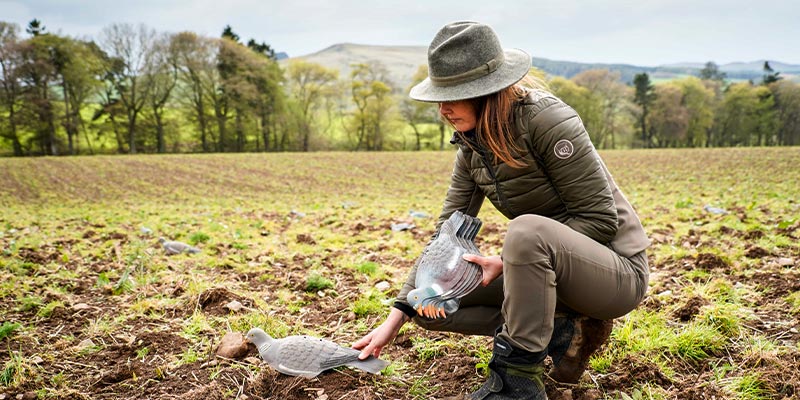 This fascinating game bird, although it has a fairly linear flight, is able to vary its trajectory quickly, becoming anything but predictable in a second.

Given the numerous scenarios in which it can be bagged, the choice of cartridge is neither simple nor obvious and there are many factors to consider. One way of looking at it is… to each scenario, its own cartridge.

First of all, which shotgun to choose? In mountain pass hunting, semiautomatic shotguns are the most common choice, due to the third shot at their disposal.

The sudden shots are long and demanding, reaching 50-60m, and weather conditions can affect the shot distance, because wood pigeons tend to fly at higher altitudes with clear skies.

Barrels between 70 and 76cm long, which facilitate sight alignment on distant targets and improve shot accuracy, and strong chokes from two stars (**) or Full Choke (*) are preferred, for compact and effective groupings even at the range limit.

A 12-gauge 76 chambered shotgun will be perfect, weighing around 3 kg, which guarantees greater stability, combined with less recoil and muzzle climb.

First choice of many hunters, it is a faithful ally in numerous types of hunting.

In this type of hunting, the behavior of the wood pigeons will be very important.

Adventurers and the more inexperienced will get closer to the game, meaning a fairly easy shot and short distances, while the more wary will require a greater ballistic effort.

Also in this case, a semiautomatic shotgun performs its duty perfectly, but lovers of double barrels shotguns will not be forced to abandon their trusted companion, as long as it has barrels no shorter than 68cm and is sufficiently heavy.

Feeling Steel is an over-and-under shotgun that offers a great variety of configurations. Available in 12/20/28/.410 with steel shot barrels ranging from 61 to 76cm in the different calibers, it is equipped with *, ***, **** chokes, flat rib with anti-glare, and red fiber optic front sight.

For shots up to 27-30m, 33/35 grams cartridges with no. 7 and 7.5 lead will be effective. Over medium distances, on the other hand, the weight and numbering of the lead will need to be increased.

Shotguns and cartridges for wood pigeon shooting from ground hides.

In this case too, it will be impossible to predict the behavior of the wood pigeons who, attracted by the play, will approach the setting. And the rule applies here as well: to each distance, its own hunting shotgun.

In most cases a medium-light shotgun with barrels between 65 and 67cm and intermediate *** chokes /Cyl. will be more than suitable.

For the more astute, wary wood pigeons, on the other hand, a 12-gauge 76 chamber shotgun will be needed, which can support heavier weights, with one or maximum two-star choke (*, **).

Affinity 3 Elite Wood is Franchi’s new semiautomatic hunting shotgun, with 71cm barrels in the 12 gauge and 66 in the 20 gauge.

With Grade 2 wooden stock and forearm, it features the Cerakote finish on the barrel and receiver, which makes the metal parts more resistant to corrosion and atmospheric agents. 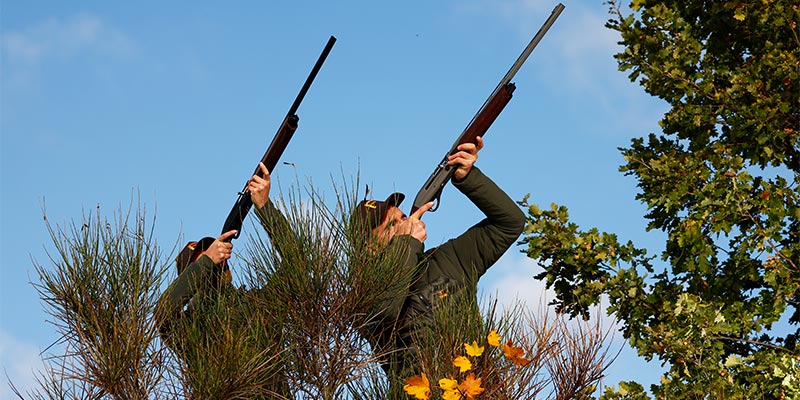 When you hunt the wood pigeon you are never alone; every new hunter is accompanied in this passion by the values of those who came before.

The tricks and lessons are handed down from one generation to another, getting refined and adapted over time, in a hunt that continues to renew itself, while maintaining a profound awareness of the importance of tradition.