Hunting shooting positions: how to shoot a shotgun or a rifle

Home/Franchi News/Hunting shooting positions: how to shoot a shotgun or a rifle
Your Franchi

Hunting shooting positions: how to shoot a shotgun or a rifle

How to shoot a shotgun: 4 hunting shooting positions every hunter should master for shouldering their rifle or bolt action.

In-depth knowledge of the four main hunting shooting positions for shouldering your shotgun or bolt action can ensure an ethical and safe withdrawal in a wide variety of situations and make the hunting day unforgettable.

When it comes to hunting, the different techniques and positions for shouldering the shotgun are a topic that inevitably finds its way into enthusiasts’ end-of-day chinwags.

Every hunter vividly remembers their first time shouldering a hunting shotgun or bolt action rifle. The feel of the wood on the fingers, the irresistible pull emanating from that magnetic instrument, with the promise of extraordinary adventures to come.

Once lit, the hunting spark never leaves you. And day after day, you learn the “tricks of the trade”, the features of different environments, the quarry to bag, you begin to understand what kind of hunter you want to become.

For safe, ethical hunting, it is important to learn a few key shooting positions, which can make all the difference during a hunting day. These shooting positions can be used with or without support, depending on the gear you bring with you and the type of hunting you practice.

The knowledge to how to shoot a shotgun in hunting for ungulate game its very important. The preparation time for shooting is often longer than in other types of hunting and mastering the main shouldering positions may end up being useful in many situations to carry out safe, accurate firing.

These can be identified as the following: standing, kneeling, sitting and prone. A lot of practice on the shooting range before diving into the actual hunting context is essential.

SHOULDERING THE SHOTGUN FROM A STANDING POSITION

It is certainly the most difficult and the most challenging of hunting shooting positions. It’s usually used when hunting with smoothbore shotguns, whether they are semi automatic hunting shotguns, over and under shotguns or side by side shotguns.

Demanding game such as the woodcock may require immediate, close-range firing, which can only be done from this position.

The same occurs in wild boar hunting with semi automatic or slug over and unders, when the wild boar appears in the thick of the woods, time is of the essence. Here the hunter’s skill and coolness make the difference to the success of drive!

The stock is very important in this shooting position. The more natural and immediate the contact between stock and cheek, the faster alignment and aiming will be. Make sure that the cheek is well connected to the stock and that the recoil pad rests perfectly on the shoulder for an accurate shot.

Positioning yourself at 90 degrees from the target, it is important to place your feet at shoulder width apart while keeping them firmly on the ground. In this instance, a smoothbore shotgun that is natural and ergonomic on shouldering is very important.

With a bolt action rifle, on the other hand, standing shooting is very rare if you do not have a support such as a bipod, shooting sticks or even simply a tree trunk on which to rest the rifle – basically supports that offer high shooting stability and allow you to aim at greater distances. Hunting big game in Africa, especially dangerous ones like the Big 5, could be very challenging. In this hunting one rarely has the time to seek support and it is the hunter’s coolness that makes the difference. In these situations try to wrap your arm with the shoulder strap o your rifle. 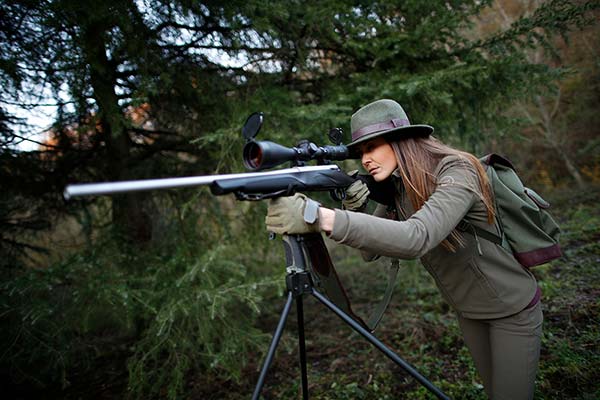 SHOULDERING THE BOLT ACTION FROM A KNEELING POSITION

It is the second fastest position to take, in this case mostly used to shoulder your rifle. If executed correctly, it guarantees good stability, even though there is only one elbow supporting the position. This is a good position to take up for the stalk hunter who spots the game but does not have much time to take up another position.

It also allows you to see the quarry beyond bushes, tall grass or other obstacles that may hinder a clear view. For shouldering and aiming correctly, you need to position your dominant knee at 90 degrees to the other side knee and bend your leg on the ground. The dominant foot should have contact with the ground as possible for greater stability. After sitting on your foot, the supporting arm is placed on the non-dominant knee, taking care to have an extended, stable contact zone.

Be careful not to place your elbow on your kneecap – it is a very unstable support!

SHOULDERING THE BOLT ACTION FROM A SITTING POSITION

As a position, it takes a little longer than kneeling, but ensures greater stability. The great advantage it offers the hunter is that both elbows have a supportive base, while still guaranteeing a good view, being high enough to overcome the most common obstacles. The most commonly used of the variations of this position is the cross-legged, with both elbows resting well on the knees.

The first few times it may seem a little unnatural, but after a little practice, everything gets more comfortable. Again, you can use different support tools, such as bipods or hunting sticks to well place your rifle.

SHOULDERING THE BOLT ACTION FROM A PRONE HUNTING SHOOTING POSITION

Prone position it is the longest position to take up, but it is certainly also the most stable. Often used when hunting wary game and in environments with natural differences in height – such as when hunting roe deer or chamois in the mountains – it allows the hunter to stay as hidden as possible and go unnoticed while setting for a long range shot.

Don’t put you left hand on the optic!

The main disadvantages of this hunting shooting position are the view, which can be partially limited, and the time it takes to assume. However, if there is enough time, it gives great satisfaction! To position yourself prone, you need to lie down on the ground with your non-dominant arm forward to support the bolt action stock. If you have support even better! Even the humble rucksack can serve that purpose.

After straightening your legs, you need to point your feet outward with your ankles flat on the ground. Of course, it can prove a tad uncomfortable, but the idea is to lean on the ground as much as possible, as far as mobility and ability allow.

The stock must rest well on the shoulder, in order to offer maximum stability and allow the dominant hand to shoulder the bolt action firmly and have stable access to the guard.

Mastering these main shooting positions will make hunting activity safe and ethical, allowing you to experience all the thrills hunting offers in total respect of the natural heritage that every hunter finds themselves tasked with safeguarding.