Camouflage is an art, and for some types of hunt, an essential element. Which camo is most suitable for my semi automatic camo shotgun or for my bolt action rifle?

Hiding in vegetation, making sure not to make a sound, or staying still and suspending, in instances that seem to last an eternity… or just a second, until the perfect moment to go into action. The beauty of the hunt is also this, all the attention and preparation necessary for the success of the hunting activity. And in some types of hunts, the techniques of camouflage are fundamental, especially for ambush hunting. Even more important is choosing the perfect camouflage for your hunting instrument, may it be a semi automatic shotgun or bolt action rifle.

It’s true, even the eye wants its part and the proliferation of the different camos, which have been coming from the American market to Europe for years, are likely to also tickle the instance of the least fashionable hunters!

Who hasn’t been caught at least once by the colors and camouflage patterns of guns that are displayed on armory racks? Here camouflage becomes a distinctive element, which, in addition to embellishing a gun in an original and creative way, is also extremely functional for certain types of hunting.

The design techniques for different patterns are increasingly accurate and avant-garde, carried out keeping in mind the perception of the game that will be hunted and the hunting environment.

What interests a hunter is the so-called cryptic mimicry, when man must be confused with the environment that surrounds him in order to become invisible in all respects. The traditional approach to mimicry was to appear completely familiar to the wild, using sticks, leaves, mud.

Today, thanks to the evolution of the science of perception and 3D design, the hunter and his shotgun or bolt action rifle simply disappear into the vegetation.

The two concepts appear similar, but in reality, they can hide behind themselves the success or otherwise of the hunting action.

What the wild animals perceive most is the human figure as such, as an element that contrasts with the surrounding vegetation: contours of the body, face and hands that seem to mirror the vegetation… and obviously the profile of the gun.

A perfectly camouflaged hunter may not be concealed at all, because he’s not integrated with the environment.

For this, the camouflage that breaks down not only the figure of the hunter, but that of the shotgun or rifle, could make all the difference.

Every type of hunt has its suggested camo, that, beyond responding to the tastes of the hunter, is designed to allow him to vanish from the perfection of certain game in a given hunting environment.

And thanks to the great variety of patterns, the possibilities are infinite! Let’s give a closer look at some camouflages.

Among camo rifles, the Horizon Varmint Elite Subalpine has a pattern designed specifically for ungulate and varmint hunts.

The Subalpine camo is perfect for hunting and appearance from the ground, camouflaging in terrain covered with trees and vegetation.

Specially created based on scientific studies of camouflage in combination with animal vision, the concealment technology of this camo rifle is designed for engagement distances of 50 metres or less.

One of the scientific principles behind the Subalpine pattern is the importance of the largest neutral areas in the pattern (macro-pattern). The hunter, thanks to a contrast system optimised through detailed shading and colouring, will fade into the vegetation.

The latest Franchi arrival to color the new bolt action rifle Horizon Elite Strata, is a camo that combines macro and micro-design patterns, studied expressly to challenge the perception of wild ungulates.

Wild animals like chamois, roe deer, wild boar have a 280° field of view, more than double that of humans.

The selective hunter’s world is characterized by a high-contrast environment and by the vertical lines of trees that highlight the human figure.

While macro-patterns hide the profile of the bolt action from long distances, the micro-patterns merge them with the terrain at close distances.

With the Strata camo rifles… being invisible has never been more natural. 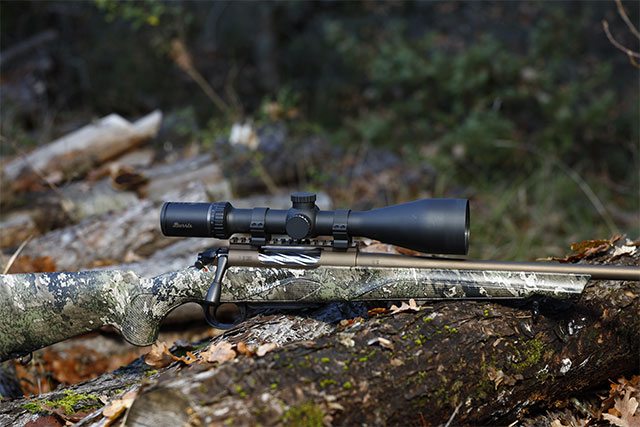 With the finish of the semi automatic camo shotgun Affinity 3 Elite Bronze available in 12 gauge or 20 gauge, and from this year in the version super magnum Affinity 3.5 Elite Bronze, it’s a camo purposefully studied for waterfowl hunting, when hidden in barrels or huts, hours and hours are passed even only for the emotion of seeing the silhouette of a flight of teals in the sky.

More than a simple camouflage pattern that makes the shotgun seem like something, this is a real camouflage, which means that the shotgun isn’t noticed at all by the waterfowl, which are gifted with a very sharp sight.

These wild animals are in fact particularly sensitive to colors and the continuity of their surroundings, but through the micro and macro-patterns, as rich as possible in detail, and a chromatic manipulation that creates a wide range of depth, the Optifade Marsh camo is capable of confusing the sight of the waterfowl and of making the semiauto simply disappear into “nothing.”

Twin to the Marsh version, Optifade Timber is the camouflage of the Affinity 3 and 3.5 Elite Cobalt.

Based on the same manipulation of color, it presents a darker nuance for better blending into the darkest swampy environments.

It’s a camo optimized for distances between 10 and 35 meters, which considers how waterfowl modify their perception bit by bit as they descend towards the hunter.

Given that the water reflects both the gleam of the sky and the shadows of the rushes and the tree branches, this pattern is made of high-contrast areas, designed specifically to elude the perception of the water birds.

These semi automatic shotguns, in the version Cobalt and Bronze with alloy reciver and steel barrel, are preferred by the WET Tribe, the Tribe of the Water Element. 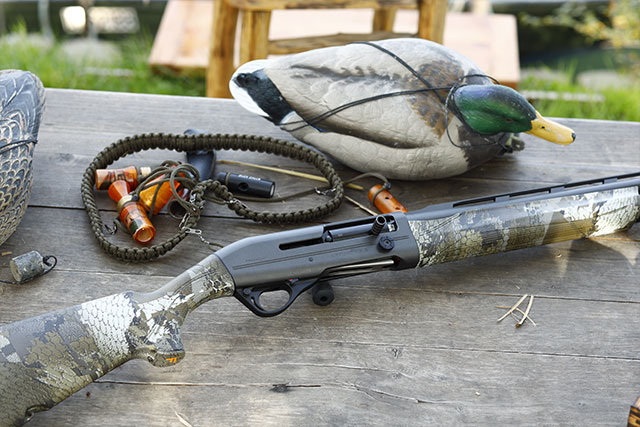 Designed for the “waterfowler,” even this camouflage is quite suitable for hunting water birds.

Cattails, sticks, ears of wheat, areas that imitate mud and the bark of trees: an extraordinary variety of details that, combined, contribute to constructing a hyper realistic camo, capable of reproducing the shadows and contrasts that you find in swamp and lagoon environments.

Available in the models magnum Affinity 3 Max 5 and supermagnum Affinity 3.5 Max 5, as well as the version Compact, it’s an additional variation of the ideal camouflages for aquatic hunters.

In conclusion? To each hunt, its own shotgun camo!