Hog hunting is practiced in five main techniques, which can be further spilt into two large groups, collective and individual hunts… but the appeal of challenging the king of the bush is always the same!

Hog hunting is the most practiced big game hunting in Italy, one of the most popular worldwide, capable of arousing a mix of emotions and adrenaline.

Deeply rooted in Central European culture, it is hunting that is as exciting as it is challenging and is practiced using a large variety of techniques.

The hog has an annual reproductive rate ranging from 120 to 200%, whose presence needs to be controlled by regional plan, especially to avoid the possible damage it may cause to crops and by being too much in proximity to inhabited areas.

Despite its considerable size, which in the Alps can range in adults – known as “blacks” – between 100 and 200kg, it is an ungulate that puts a strain on the ballistic skills of hunters, thanks to its sudden, quick movements.

Leathery-hided and smart, it is undoubtedly the king of the bush! Here are the 5 main hog hunting techniques.

Traditional form of collective hunting, in widespread use especially in Eastern European countries, battue hog hunting is sometimes confused with driven hunting, which is differentiated by the higher number of beaters.

Particularly suitable for large areas, such as the great Romanian and Hungarian plains, it is the hunting method recording the highest number of participants, and in some countries represents a truly traditional custom.

The success of hunting operations consists in the ability to create a real cordon of people, progressively advancing within the woods to push the hogs towards the stakeouts.

A slug shotgun is ideal for hunting hog on a battue hunt as well as on a driven hunt.

Affinity Slug is a smooth barrel semi-automatic shotgun in black technopolymer, characterized by great effectiveness combined with excellent handling in its shouldering. Available in 12 gauge only, it is the perfect ally for this hunt.

Driven hunting – or braccata in Italian – is one of the best known and most widespread form of hog hunting, a very engaging technique.

Wake at first light and, thermos full, begin the search for nocturnal boar treads and dens. Once the tracks and lairs have been identified, move to organizing the stakeout posts accordingly.

The group of hunters involved, who in effect constitute a team, is made up of dog-handlers and posts, as well as the group leader, whose job it is to coordinate the hunt so that the hunting action ends successfully, and in total safety.

In this type of hog hunting, our faithful partners play a fundamental role. Indeed, a pack of dogs led by their handler have the delicate task of pushing the game to the stakeouts.

Emotion mounts with the chorus of yelps and baying, right up to the height of pathos when the “king” suddenly emerges from the scrub.

Among the over-and-under slug shotguns suitable for driven or battue hunts, Feeling Slug is the latest addition to the Franchi hog hunting family.

Equipped with a black light aluminum alloy receiver with specific engraving, it immediately stands out for the compactness its short 55cm barrels lend, giving it a lightness, at just 2.5 kg, and unparalleled handling in shots, amongst the thick of the bush, typical of this hunt.

In Italy, another form of collective hunting is the “girata” which, however, is carried out in small groups and not over sprawling areas. A single bloodhound accompanies the hunters who themselves generally do not number more than 9 or 10 people.

This type of hunting is very useful for containment in areas where respect for environmental peace and other wildlife species is important, such as nature reserves or areas not far from urban centers.

The hunting method is similar to the driven hunt, but takes place in a shorter period of time and means more operations in the same day.

In all types of collective hog hunting, in addition to synergy with your hunt mates, the use of high visibility vests is utterly crucial to ensure that the day goes safely.

Stalking hog is a particular method, not very commonly practiced. Experience and skill are the watchwords for a fascinating hunting technique replete with serious thrills.

And then absolute silence, interrupted only by the whispering of the wind in the foliage and the regular breathing of the hunter who, ears pricked for the slightest crackle, moves with padded tread among the vegetation.

The stalking hunt is a technique where the hunter follows previously identified and tested paths, bagging the quarry in the twilight hours.

The morning is usually more fruitful than the hours before sunset, because you have more time available and the degree of visibility increases as the sun rises.

It is essential to always remain downwind, so as not to alarm the hogs in pasture.

Rifled guns are the choice for this type of hunting, for the reliability and the degree of accuracy they offer. In fact, in this kind of technique the hunter never allows an approximate shot in this hunt; hunting ethics is a constitutive element.

Equipped with exclusive checkering for a secure hold and a Smooth Sense stock, which guarantees excellent grip in the five main shooting positions, it is perfect for stalking, where the hunting conditions and the shooting position cannot be known in advance.

Having a bolt action that shoulders naturally and ergonomically can really make a difference! 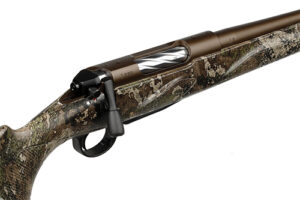 Another popular technique using bolt action rifles is hunting from hide or hunting from high seats, carried out from a position on the ground or raised, such in a hunting tower, generally near the places where hog pass.

It is a solitary and intimate hunt, where observation of the quarry is as important as the action itself and is what gives the latter its meaning.

In hog hunting, whether from a hunting tower or not, it is essential to look for a support that guarantees perfect stability in the moments right before aiming, to pull off safe, accurate firing.

All Horizon rifles have bipod mounting setup and a certificate of accuracy of 1 MOA out of 3 shots fired.

And in the camo Horizon Elite Strata version, the camouflage of the stock makes the bolt action invisible and perfectly camouflaged with the environment, to escape even the acute perception of ungulate game.

Whether practiced collectively or individually, hog hunting is one of the most exciting forms of hunting culture!