When hunting chamois, effort and emotion are inseparable companions, because only the hunter ready to make sacrifices will be rewarded with gifts from the mountain.

Chamois hunting is a hunting activity that requires notable energy exertion and absolute dedication. The alarm clock rings early because, as those who know the mountain well, “the sun eats the hours.” And with a full thermos, a backpack on their shoulder and a lot of passion, he leaves for a new adventure.

Among the different types of selective hunting, chamois hunting is quite particular, because the hunter knows that he could pass an entire hunting season looking for a single animal… but maybe it’s right here where the magic lies.

Selective hunting is an important activity used to regulate the presence of ungulates in different territories, because a high number of specimens in a determined habitat brings about the weakening of the species.

And in a moment like this, in which the presence of wild boar near inhabited centers is filling the news section, the value of selective hunting is appreciated even more.

Generally speaking, with fine weather, usually between May and June, the moment of census arrives to draw up a plan of abatement, which takes into account the characteristics of different species to be threatened.

For example, it’s important to consider how a timid animal like the roe deer isn’t easy to locate in comparison to others, but it’s not because of this that it’s in smaller numbers. Once the leaders are assigned and autumn comes around, hunting season opens!

Brush strokes of black on white snow… it’s the most beautiful sight a chamois hunter could desire. Mountain hunting requires a physical preparation worthy of the best athletes for every type of wild animal to be hunted, but the king of the peaks is certainly one of the most challenging wild ones.

The mountain hunter must become a bit of a meteorologist, because when you arrive at high altitude, the climatic factors often become critical and walking with a meter of snow and the cold that cuts off your sight requires not only a trained body but wrought-iron psychological determination.

And the chamois brings you right up there, between the snow and the sky.

Of ancient origin, the chamois is present in the mountains of central and southern Europe. Their dense coat allows them to withstand rigid temperatures, even thanks to the dark color that attracts rays of sun.

They usually live between 1,000 and 2,800 meters of altitude, but during the winter, due to all the snow, they often hike down to lower altitudes.

Their horns are relatively small, with a hook form, and the two sexes are differentiated by the grade of inclination or hookness, greater in the males, and the distance from the base to the tip, that, in females, is less pronounced.

Chamois horns are very important for the observation phase, because they also indicate the age of game, thanks to the so-called rings of growth or junction rings, annular furrows present on the external coating and visible even in yearlings.

Chamois, thanks to its nutritional properties and traditional value, is also the protagonist of numerous game meat recipes.

Between the hunting rifles, the manual repetition bolt action rifles are ideal for this game. which are the calibers most suitable for chamois hunting?

After the long search phase, after setting out under the stars and having observed the sky slowly fill with color, you reach the pastures where the chamois eat. It’s important to not make the smallest noise and proceed with caution towards the optimal position.

Today, thanks to the precision portable rangefinders, it’s possible to establish the exact shooting distance. It’s fundamental to be accompanied by a good scope, which can range from around 2-16×50 to 2.4-16×56 based on the habits of the hunter, in order to shoot more precisely from long distances typical of this hunt.

In regard to the choice of bolt action rifle, all of those that possess a discreet grazing light are the most suitable, like the .243 Winchester, .270 Winchester with a 130-grain bullet, ideal for hunting chamois, and all 6.5mm, like the young, precise, and fast 6.5 Creedmoor from Hornady.

Lightness, precision, and excellent shot are the keywords to evaluate which bolt action rifle to rely on for chamois hunting.

All of the bolt action in the Horizon family by Franchi have a weight less than 3 kg without the scope, except for the .223 Rem, and are light on the shoulders, perfect for long excursions that hunting in the mountains requires.

In addition, all of Horizon hunting rifles are delivered with a 3-shot in 1 M.O.A. certificate of precision and have a shot adjustable by screw from 800 to 1,900 grams, to adapt to the sensitivity of every hunter.

The Horizon family offers a huge choice, to meet the need of every hunter. We find the new Horizon Wood, with wooden stock and available in the main calibers: .308 Win, .30-06 Springfield .300 Win Magnum.

Then, we find the synthetic models with a Cerakote barrel and action, the camo Horizon Elite Strata and the Horizon Elite Gray, and, lastly, the Horizon Black Synt, mother of all Franchi hunting rifles, from this year listed in a new configuration. 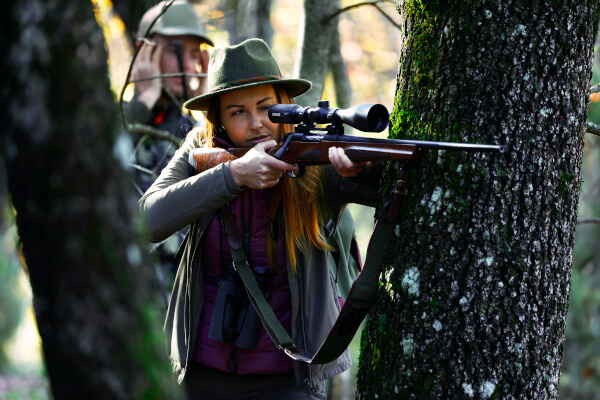 Like with other types of hunt, even in chamois hunting the hunter must concede to this nobile animal the last meal, according to middle-european tradition, common even in italy.

A green twig, the so-called “Brunch,” is placed in the animal’s mouth and the hunter places on the head another one.

Hunting ethics is an essential element in selective hunting, in which the profound respect that is established between hunter and animal is one of the peculiarities that makes this hunting activity so special and that pushed enthusiast to wear out their boots up and down between valleys and rocks, even just to observe the animals in pasture through a set of binoculars.

And then there are the mountains, with their rules and their atmosphere. Taking a minute to stop and observe the extraordinary peaks that jut up between an expanse of clouds, and they remain there, suspended, almost floating in air…

Even this is one of the beauties of the hunt, boundless panoramas in which you feel totally one with yourself.