5 tips for a perfect still hunting

5 tips for a perfect still hunting

Still hunting is one of the most popular techniques, because it adapts to different types of game. Here are some useful tips to improve your hunting strategy and experience some unforgettable hunting.

In still hunting, thrills lie just around the corner. After all, when hunting, there is always something of a reversion to being children, forgetting the routine and chaos of the city, and enjoying those moments where contact with nature and hunt passion are all that matters.

When it’s just you, your shotgun and the hunt. Still hunting thrills hunters worldwide. It could be said that it is the technique most widespread and applicable to different types of game, from ungulates to waterfowl.

In this hunting practice, hunters position themselves in a strategic spot, leaving the game to come towards them. Seeing but not being seen… this is the still hunt mantra, where the hunter’s ability lies in never being identified by the game which does not even notice the hunter’s presence.

HOW TO CHOOSE THE SPOT FOR POSITIONING YOURSELF IN STILL HUNTING.

In still hunting, the first rule is to know the habits of the game you wish to bag. Ungulate game spends most of its time in a few activities: feeding, sleeping and moving from the places of pasture to those of rest.

In many cultures, the moment of rest is sacred – and the same could be said for hunting ethics. Bagging game at bedding areas is not advised. The reasons for this choice, however, are also technical. Indeed, a deer that goes to the place where it usually rests will be more inclined to swiftly lie down on the ground.

Additionally, the vegetation in these areas is usually denser, almost creating a natural shelter for game. Precisely for this reason, the hunter would have much more difficulty in having a clean view of the game.

For these reasons, the preferred position for still hunting is located near the quarry’s feeding areas which is usually found in areas of more open vegetation. Hunters will therefore be able to position themselves at a greater distance, reducing the chances of being seen and taking advantage of the excellent field view and the wide variety of angles for perfect aiming.

WHAT ARE THE FEATURES OF A STILL HUNTING SITE?

Once the best place has been identified, it is necessary to prepare the stakeout position, which can be permanent, like a tower, or temporary. In the latter case, these are platforms mounted on trees, known as tree stands which, although more common in bowhunting, are used in some countries, such as Canada, for still hunting ungulates as well or free units supported by a frame of metal or wooden poles.

Sometimes, a hunter‘s stalking is so simple that it hardly has a real name. Lean against the base of a tree, sit with your head hidden in the tall grass, lie down behind a bale of hay, or hide in a crevice in the rocks…

Creativity in concealment is one of the most interesting aspects of this hunt! Many hunters prefer an elevated position in hunting from high seat or in selective hunt, much practiced in Italy.

Whether you carry it out from the classic hunting tower or lie down on a hill or high ground, there are definitely many advantages for the hunter.

Being above a fallow deer or roe deer line of sight means, first of all, not being identified. Additionally, the hunter’s smell is less likely to be perceived in evry whether conditions.

Whatever the preferred game and technique, in a still hunt there are three senses the game possesses that a hunter needs to “cancel out”: sight, smell and hearing.

Perhaps the most difficult to control, it is certainly the most important: the sense of smell.

Despite the many products on the market, such as sprays or lotions, which promise to neutralize human odour, the number one rule to be on the safe side is… always stay upwind! Metaphorically speaking, the hunter always keeps a finger raised, checking the changes in the air which can turn, especially in windy days, – in but few gusts – from friend to foe. Often this means, where possible, setting up multiple stakeout posts allowing you to quickly change your position depending on wind direction looking to have the wind in your face.

The art of still hunting incudes the escaping to the sight of the game that is another great challenge in stalking. Both ungulates and waterfowl, although their traits are different, have proverbial vision.

While ungulates have a wide field of vision (more than double that of human), reaching 280°, teals, pintails, mallards and all other waterfowl have very keen sight, able to perceive human presence even from considerable distance.

The prime enemy is movement. From a distance of 30 m, deer might look hunters right in the face without perceiving them at all, but a simple arm movement could betray their presence. This is why in still hunting, positioning yourself so that movements are reduced to a minimum is essential expecially in deer hunting in which moving slowly will make the difference.

Another aspect to consider is camouflage.

Ever more technological and ever more cool, there are numerous patterns to add a touch of style to your hunting gear, and not just when it comes to clothing. Today, the camos to “dress” your hunting shotgun or bolt action rifle today are specially predicated on the perception of the quarry to break forms down to become… simply invisible.

Last but not least, it is vitally important to reduce sounds to a minimum. Paying attention to clothes, eliminating anything that may cause friction, arranging the stakeout post so that there are no branches or protrusions that could annoy are all precautions which can make a difference.

And then, listening to the sound of nature in absolute silence… isn’t it magical? 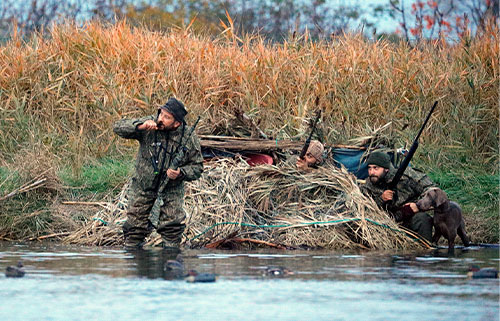 SHOTGUNS AND RIFLES FOR STILL HUNTING.

The hunting instruments of still hunting vary depending on the game to be hunted. It is absolutely the case that semi-automatic camo shotguns with barrel lengths of over 70cm are ideal for waterfowling, both the magnum and the 89 chamber versions.

Affinity 3.5 Elite Cobalt and Bronze are two 12-gauge semiautos that combine the power of a super magnum with extreme handling and ergonomics. The Optifade Timber and Marsh camos respectively have been specially designed to evade waterfowl perception.

In addition, the resistance of the Cerakote coating on the barrel and receiver makes these shotguns perfect for the climatic and environmental conditions of lagoons and marshes.

On the other hand, with ungulate game manual repeating bolt action rifles are the ideal choice among rifled bores for still hunting.

Horizon Elite Strata is an accurate, reliable bolt action which, thanks to the ultra-modern Strata camo, guarantees excellent concealment, combining micro- and macro-design schemes that break up the figure, blending it in with the background.

Equipped with a fluted bolt with three locking lugs and, thanks to its 60° opening, it allows even very large scopes to be mounted.

Every Horizon is delivered with a 1 MOA out of three shots certificate and our warranty on all mechanical parts.

True, nothing beats experience for improving your aim technique. In the same way flight miles make a pilot, one could say that hunts make a hunter. However, there are some small tricks to consider, to minimize movement and achieve maximum effectiveness in stalking.

Keeping your hunting rifle aligned in the direction in which you plan to shoot, imagining in advance what the movements will be to make the shot, is a good habit. Many people use a bipod which, given the time available, allows for maximum stability for an accurate shot and a successful still hunting.

If, on the other hand, the support is mobile, like a backpack or a tree trunk, you need to test it to make sure it works.

A final tip… never cease to expect the unexpected!

Nine times out of ten something unforeseen happens – like a wild boar boldly coming out of the bush, from precisely the opposite side to where it was expected.

In such an event, sangfroid can prove decisive. No jerks or sudden movements, but caution and control.

If possible, you should move when the quarry is facing in another direction, when it passes behind a tree or is distracted by food or other animals, to prevent them from perceiving the moving silhouette.

This is what still hunting is: a mix of tenacity, passion and dedication.

Umpteen hours of preparation and waiting, which come together in the perfect moment, when the game pokes through the vegetation, the heart rate accelerates and the hunter, from up in a hunting tower or hidden in their stakeout position, marvels at all that beauty, just as if it were the first time.