How to train for clay pigeon shooting in Sporting

How to train for clay pigeon shooting in Sporting

Sporting is an increasingly popular shooting discipline among hunters and is divided into two specialities, Sporting and Compak. Here are 7 tips for proper training for clay pigeon shooting.

Clay pigeon shooting is a very popular activity not only among shooters, but among all those hunters who, in the hunting fallow period, want to keep trained and greet the opening of the hunting season in perfect shape.

Clay pigeon shooting includes various disciplines, from Olympic ones such as Trap and Skeet, to those that simulate the shooting done during a day’s hunt.

In this latter case, we are talking about Sporting, in turn divided into Sporting and Compak.

While Sporting (roving) takes place in a natural setting where the shooter moves amongst vegetation simulating a real hunting situation, Compak (on platform) is practiced on a shooting range very much like that Trap.

In this there are also five platforms, several different clay target-throwers that reproduce the trajectories of the various game… along with the desire not to miss even a single target!

7 tips for training at the clay pigeon shooting range.

To lock in on, and then hit the clay target, it is necessary to aim in front, above or below according to the trajectory.

The calculation to establish where and when to hit is mathematical, with no room for error… shame the shooter only has a few moments to do so!

For this experience, reflexes and instinct play a fundamental role, combined with correct physical form.

Clay pigeon shooting is a sport that requires well-trained muscles to support the shotgun’s weight, on average between 3.2/3.6 kg, and posture during long training sessions.

At a scientific level, clay pigeon shooting is not defined as a “strenuous” sport. In fact, the elite shooter with a detailed understanding of trajectories and shooting technique ends up expending very little energy during the technical movements.

However, this cannot be said for the novice shooter who, having not yet acquired the perfect technique, tends to use excess movements: to rest the shotgun on the wrong areas of the body and will inevitably be more tired at the end of the training session.

The upper muscles are among the most stressed, so well-trained muscles and tendons will better withstand the stresses of the shots and the shooting shotgun itself.

The abdominals and the lumbar muscles are crucial in the torso torsion needed to hit the target – these too require training.

Aerobic movement, such as a good “jog” of 50-60 minutes or a swimming session 2-3 times a week, combined with a bit of strength training in the gym, are all useful activities to train the different muscles involved in clay pigeon shooting.

A good workout also helps to develop a greater ability to stay focused during sessions, because exertion and fatigue are enemies of concentration.

Mental training is crucial to becoming a good shooter. A relaxed mind is always the best ally!

To hit the target, you must not think about anything other than that specific clay pigeon.

Some say those who find the right posture are already halfway there.

Perhaps this is a bit too optimistic an assertion, but posture really is a fundamental aspect that every shooter or hunter will need to pay attention to while on the clay pigeon shooting ground.

Left foot forward and right moved slightly – vice versa for left-handers – are the first step to maintaining balance and stability during the torso twist needed to hit the clay target.

The foot position changes angle according to the type of clay target launched.

The best shooting technique consists in thinking about the trajectory of the clay target, prestress the torso towards the machine that will throw it and at the time of the call, following the target until it passes it and firing the shot with the right anticipation, avoiding jerks during the phase the index finger applies pressure on the trigger.

It is vital not to feel weighed down during shooting sessions, be they training or competition, but to favor foods which – from an energy standpoint – are rich.

Breakfasts featuring carbohydrates, proteins and fats are advised, combined with nuts and energy drinks (still only – never carbonated) during workouts.

After the series, all those foods that do not involve long, tiring digestive processes are to be preferred.

Controlling breathing is important in all sports because, in increasing the blood’s oxygen supply, anxiety and heart rhythm are reduced, thus improving sporting performance.

It may make you smile to hear it, but the shooter or hunter who practices Sporting and Compak has to play the singer for a while.

Indeed, diaphragm breathing allows you greater control and at the same time is a fruitful exercise in concentration and relaxation.

Improving your shotgun shouldering technique can determine whether or not the day is successful.

The more familiarity you have with your firearm, the more natural the movement of the shot will be, a bit like musical instruments, which become more familiar after each note.

Muscle memory goes hand in hand with that of the mind.

An exercise some instructors recommend is to practise at home with the shotgun unloaded, mimicking the movements you make on the platform.

Affinity 3 Sporting Wood, in the new version with clear receiver and wooden stock, and Feeling Sporting are semi-automatic and over-and-under shotguns dedicated to Sporting.

Extremely ergonomic and natural to shoulder, they are the perfect allies for training from the top in view of the next hunting season.

Affinity 3 Sporting Wood is a semi-automatic available in 12 and 20 gauge, with Knurled chokes (50) of *, ***, **** supplied and TSA Recoil Pad, which helps to absorb the sensation of recoil, reducing the numerous stresses to the shoulder typical of clay pigeon shooting.

Feeling Sporting is an over-and-under shotgun in 12 gauge with 71/76 cm barrels, with 11mm flat rib with sight line, front and back adjustable trigger and 55/35 drops. 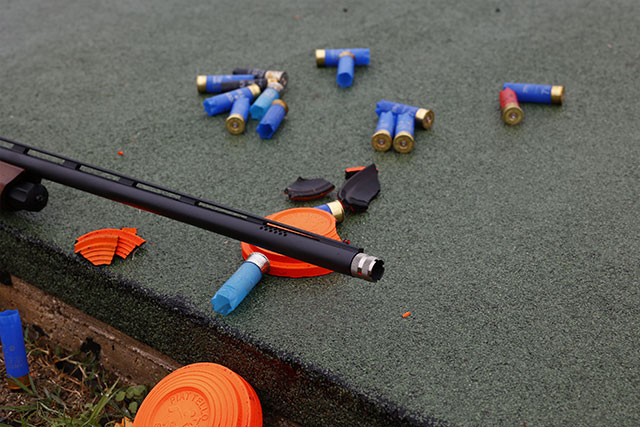 To improve at clay pigeon shooting, training yourself to shoot with both eyes open is a necessary trait. This is because our brains store more information when underpinned by greater visual perception.

In fact, having both eyes open increases the field of vision and, in so doing, even clay pigeons on extreme angles will be able to be seen correctly.

For this same reason, aiming with only one eye carries the risk of delaying the shot and not hitting the target, since keeping one eye closed while aiming decreases the field of vision and creates greater difficulty in locating the starting point of some clay pigeons.

Hence the importance of keeping your eyes wide open!

It is important for those who take up clay pigeon shooting to bear in mind that nobody born knowing anything – “as any fule kno”.

To refine your technique, placing yourself in the hands of experts who correct all the small positioning errors that you may encounter is advised – that way you can straightaway integrate those little hints which serve to improve every detail of your technique.

And now the final and most important tip… don’t forget to enjoy yourself!