For a hunter, especially if he’s a dog lover, his helper is a loyal companion on many adventures. There are many breeds of hunting dogs and each one gives the best of itself in a specific type of hunt.

What takes place between a hunter and his dog is a rich conversation, made of movements, silent signals and sensations. It’s almost a dance, in which each of the two feels the presence and intentions of the other.

The connection that is created between the hunter and his four-legged helper is made of many little, daily gestures that go well beyond simple company: a dog must be looked after, understood and loved every day.

Often a simple look is enough… When the hunter’s eyes meet those of his companion, the message is loud and clear, concentration is absolute and the hunting act is about to be completed.

What are the main types and breeds of hunting dogs?

There are 399 dog breeds recognized by the FCI (Fédération Cynologique Internationale), divided into different groups depending on different characteristics. Innate instinct, incredible hearing and olfactory senses and constant specialization are all of the factors that, throughout time, have made hunting dogs inseparable companions of today’s hunter!

Pointing dogs are called this because, as soon as they feel the presence of a wild animal, they have the instinct and ability to report it to the hunter, stopping in an upright or flexed position, depending on the breed.

A slow and gradual approach is followed by a true point. The tail in its characteristic position, tensed muscles, statuary halt, sight fixed on the point of interest: the point performance is an indescribable emotion that every dog-loving hunter recognizes!

The evolution of the action may include the lead, the recovery and the honor, if there’s more than one helper present:

Pointing dogs are among those chosen most by Italian hunters and the many types of hunt that can be practiced in Italy are, and not only: woodcock, grey partridge, rock partridge, quail, pheasant, ptarmigan, black grouse, snipe, wood grouse, each with specific and exciting characteristics.

Davide Cavaglià and Giulia Taboga with the Setters Berus and Diablo

What does characterize a woodcock hunting dog?

The woodcock is a wild animal as thrilling as it is difficult to hunt, finding itself often in impenetrable environments and soaring with a lightning and elusive flight. A true challenge for the hunter… And his helper! The woodcock hunting dog must have a formidable intuition, a wide search and steady nerves in order to not be tricked by traps set by the “queen of the forest”.

Among the most well-known breeds of woodcock hunting dogs we find:

Dedicated to this last breed of dog is the semiautomatic hunting shotgun, Affinity Companion German Pointer, the latest 2020 product from Franchi and the second protagonist of the series of Companion semiautomatics in 12 and 20 gauge, which celebrates the link between the hunter and his helper.

All of these dog breeds are quite loved by Giulia Taboga, who usually hunts woodcocks with the Feeling Woodcock, an over and under shotgun dedicated to this exciting wild animal, or with the traditional side by side Esprit. Over and under shotguns and side by sides are usually suggested for woodcock hunting because, other than being considered more “green” since they allow you to recover shells just after the shot, they give the hunter the possibility to best take advantage of the double shot. Both also available with short 62 cm barrels, they are extremely manageable and ergonomic shotguns, particularly suitable for challenging the “queen of the forest”.

What are the characteristics of flushing dogs and retrievers?

Incessant movement and inexhaustible energy! Unlike pointer dogs, flushing dogs don’t stop once they’ve noticed the wild animal, but they start to move themselves frantically. Their vigor during the hunting act is a captivating spectacle to see. Among the most well-known breeds to hunt woodcocks with, there’s surely the Springer Spaniel.

Languid eyes are certainly one of the most peculiar traits of the Labrador, the retriever par excellence, celebrated with the first semiautomatic shotgun of the Companion series, the Affinity Companion Labrador. The dream of many children, it’s a helper with Canadian origins that arrived in Europe onboard ships coming from the Labrador Peninsula. Lovers of water and swimming, it resists bad weather and adapts to any environmental condition, lavishing in tireless retrievals. Water is its element and for this reason it’s considered the symbol of the waterfowl hunting.

Gifted with extra-fine olfactory senses, the scent hounds have the job of finding the wild animal through traces of its scent left on the terrain. Their instinct brings them to hunt furred game, like wild boar, mouflon, stag, fallow deer, roe deer, hare and fox. The brave scent hound, after having uncovered its prey, guides it to the hunter or along the route of hunter hides. Among the most known, we find the Segugio Italiano, a dog with ancient origins that they say arrived in Italy on Phoenician ships coming from Ancient Egypt.

Special mention goes to tracking dogs, fundamental for the recovery of ungulates in the unfortunate occasion in which they move from the anschuss, the place where they were wounded.

Instead, courage is the distinctive trait of terriers. Used to drive out game hidden in nests in the earth, this type of dog often carries out its job with a scent hound, engaging a sort of struggle with the wild animals in pastures or hidden in underground tunnels to bring them out into the open.

How many haven’t been won over by the temperament and vivacity of the Jack Russel Terrier, originally used for fox hunting?

How to choose a hunting dog? 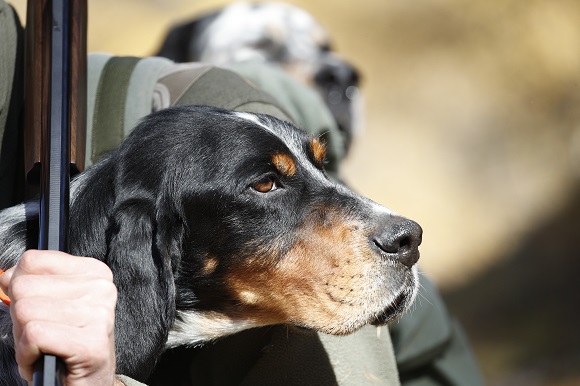 It’s a difficult and very personal decision, determined by the type of hunt that one does. But beyond pedigree, morphological and behavioral characteristics of every breed and every dog, what is most important is the patience of the hunter in training his helper, in order to obtain maximum harmony and, during the hunting activity, to become a single unit.

What is certain is that without our four-legged companions… Hunting would not be the same thing!