Roe deer hunting is a unique emotion that requires dedication, great passion, and a precise and trustworthy bolt action rifle.

There are wild animals that bewitch you and capture you more than others, and in these situations, the roe deer hunting isn’t simply passion but becomes real and true magic. The deer’s profile, with its characteristic reddish brown coat, lively eyes, agile and quick muscles, carries you of a fairytale world and brings to mind echoes of a distant childhood. Maybe it’s because of this that they call it the “elf of the forest”… And roe deer hunting is again a discovery, a vortex of sensations that enrich the spirit.

Belonging to the family of ungulates, this little deer, known also as roe buck, is a wild animal with a timid and cautious character, definitely among the most fascinating to hunt. From the Alps to the Apennines, from the cultivated areas of the Scottish Highlands, the wild land of ancient legends, to the great plains of the east, roe deer population thrills hunters in all of Europe, but not only.

A wild animal with a red coat, covered in lighter spots for better camouflage, is a small deer that can weigh up to 20-25 kg.

Crepuscular or nocturnal, preferring sunrise and sunsets, it has a great ability to adapt. It lives in thick woods, large prairies, but also in open forests, which have thick undergrowth and, here and there, clearings of vegetation. Defined as a selective browser, it feeds on shrubs, sprouts, grains, buds, and apices and often enters in competition for food with other deers.

Roe deers meat is one of the richest of wild forest animals, also for its nutritional properties, the protagonist of a great variety of recipes based on game meat.

Selective hunting is a fundamental activity for managing ungulate game. Hunting from hide and stalking, as Scottish hunters call it, are the principle techniques for roe deer hunting.

Hunting the “elf of the forest” starts well before taking up a rifle, with the count of the heads in the area that must comply with a rigorous plan of abatement, specific for every region or geographic area. Tireless and passionate, the selective hunter even works when hunting season is closed precisely for the importance that his job has in the management of the natural patrimony: he installs the feeding troughs, participates with the census, the maintenance and construction of hunting blinds. It’s a difficult job that requires patience, but rewards with great satisfaction!

The roe deer is a territorial animal, which is why hunting from hide is a profitable technique. Despite the roe deer not having very acute vision, the hunter must adopt an entire series of precautions not to alarm it and not to give himself away. Lurking near previously identified pastures, the hunter must be sure not to make any sound and scrupulously consider the direction of the wind during the roe buck stalking.

This type of hunt requires necessary optical instruments, usually binoculars and spotting scopes, as well as taking special care in positioning for the shot.

They say that haste is a poor advisor… And it’s never been more appropriate than in this situation! Without hurrying to shoot, the selective hunter, who hunts from hide, places himself in the classic position stretched out on the ground, with the rifle well-placed on a stand or backpack.

The shot from a lying position is one of the most precise and well-thought-out, guaranteeing a clean takedown and thus removing the threat of hurting the animal. Hunting ethics is, in fact, an essential element of waiting.

There’s a profound respect towards the wild animal that goes back to the ancient Northern European ritual of the “last bite.” In fact, the hunter, having reached the spoil, turns it with its right side resting on the ground, placing in its mouth a sprig of noble vegetation, as a final gesture of recognition and respect towards the animal. 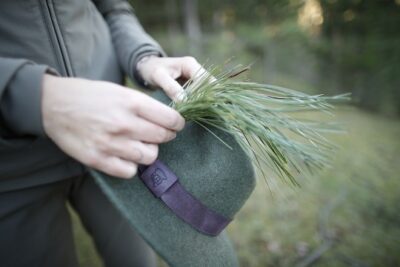 The bolt action Horizon is a precise and ergonomic rifle, that already has mouths for the swivel on the shoulder stock and fore-end and shaping for the mounting of bipods. In addition, the spiral shaped three lug bolt allows for a 60° opening, permitting access to the action without touching the optics, even in the presence of very large tubes, and to carry out a quick reset through a streamlined conical bolt handle.

However, there are other areas that, in case of too dense forests or many cultivated fields, are less suitable for roe deer feeding habits. In this case, the roe deer stalking technique might be the best choice.

Sneakily moving through the woods, sliding silently from trunk to trunk, with the hope of seeing a wild animal appear is one of this hunt’s most intense feelings!

The roe deer, like most ungulates, is a glutton for salt, so the prior placing of some “salt licks” on smooth trees is an excellent way of attracting it to certain places of supply.

At this point, nerve and shot precision make the difference! In fact, in stalking, the shot comes almost always on a readjusted stand with little time available, and the hunter’s excellent ability to adapt, combined with an ergonomic bolt action, is fundamental to make sure that the roe buck hunting activity is successful.

This bolt action is the result of the development platform XS that, having studied the shooting habits of more than a thousand hunters, has come up with an extremely ergonomic rifle, capable of being held in the five principle shooting positions with an optimal grip.

There are calibers that have entered into history, like the 1935 .220 Swift, Winchester ‘s “fastest cartridge in the world”, that was capable of launching a projectile at 1200 meters a second. But which calibers are most suitable for roe deer hunting?

The caliber of choice for this hunting this wild animal is the .243 Win. Be careful to choose the most suitable bullets, keeping in mind that speed is a very important factor, because, for the .243 Win, bullets that are too light could run the risk of distorting before doing their job. For roe deer, 80-85 gr. bullets are preferred in a .243 caliber Win with a 6mm cartridge. Generally in Italy, it’s also suggested to use, for your bolt action rifle, medium-small calibers too, like the .240 Wby and .270 Win. The conversation is different for hunting in other countries, in which often all 6.5 are used with light bullets.

Hunting is made of long waits in the early mornings, inspecting the horizon, in contact with nature. When the lively antlers of the roe deer sprout from the vegetation, good optical instruments and a well-calibrated rifle are all you need to start the magic.