GIULIA TABOGA, THE LAST WOODCOCKS HUNTING OF THE YEAR

Home/Franchi News/GIULIA TABOGA, THE LAST WOODCOCKS HUNTING OF THE YEAR
Your Franchi

GIULIA TABOGA, THE LAST WOODCOCKS HUNTING OF THE YEAR

Woodcocks hunting is a passion that grips your soul and once it enters inside you, it never lets go… a bit like all types of hunting.

I moments like this, when the hunting season is closed, sometimes my mind returns there, to the memories of special hunts, like the last woodcocks hunting of this season…

The charm of such an unpredictable animal, the difficulties that must be faced to find it, going into humid and rough environments, the tail of our faithful helpers idle the moment before it’s about to fly away, the heart that speeds up as soon as the woodcock bounds into the air with its lighting and elusive flight.

Unique feelings that imprint on the memory and that only a challenge with the queen of the forest can give. Many say that they fell in love after the first hunt and now they can’t do without it…

For me, as an huntress, it was love at first sight. I remember the first time that I went on woodcocks hunting, how I couldn’t sleep the night before because of the anticipation. It was the first year of my hunting license, in the company of two hunting buddies and two marvelous English Setters with elegant orange and white coats. Embracing the over and under shotgun, we set the dogs free, waiting to see those movements and gestures that always give us passionate dog lovers one-of-a-kind sensations… a lead, a lunge, a good stop. 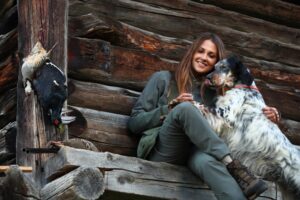 Giulia Taboga with her beloved Setter

No sound to break the silence, almost as if nature itself was waiting for the moment when the queen of the forest would appear, my hands shook from emotion… I felt as if it were a question of moments and, in fact, look at them there, statuesque, with a spectacular point and set.

I heard the flap of the wings and saw it take off, so beautiful that before shooting I watched it for a moment too long and missed it by a hair. Quickly after, a shot from my companions hit it a bit further ahead. It was the first time I saw a woodcock up close… How exciting!

From that moment, woodcocks hunting became one of my favorites, because of the unrepeatability of the hunting actions, so different from each other.

Woodcocks hunting is a continuous challenge. Their migrations will always change and be influenced by numerous factors, always moving in search of the most favorable climate conditions.

This hunting season was quite peculiar. Woodcocks were slow to arrive and initially preferred to stay at high altitudes as the average temperatures were still high.

After the first snowfalls in the mountains – at the beginning of December – they began to descend to the hills and then gradually came down to the plains. However, we had the opportunity of numerous encounters and much fun with our dogs. The particularity of this season is that, exceptionally, woodcocks stayed on our territory until the end of March, which allowed us to extend our training with our dogs.

Personally, I had a lot of fun even though the number of outings was limited and, while I was looking for the last woodcocks, I can say that I had great satisfactions.

A true woodcock hunter is not defined by the richness of his game bag, but by his ability to fully enjoy every emotion that woodcocks hunting provides.

Among the aspects that excite me most, there’s definitely seeing the dogs at work, the role that they have with the woodcock. Over time, I’ve hunted with English Setters, German Shorthaired Pointers, and Brittany’s, hunting breeds that have made me appreciate the peculiarities of the diverse work techniques. The Setter’s free and harmonious pace puts our legs to the test, but it rewards us with an elegant point. The German Shorthaired Pointer distinguishes itself with its controlled and decisive reactions and seduces us with its noble appearance. The Brittany exhausts us with its energy, but it compensates with its impeccable retrieval and the sweetness in its eyes.

These days my loyal companion on these adventures is an English Setter named Zoe.

The gun I use for woodcocks hunting is the Feeling Woodcock, an over and under shotgun dedicated to this fascinating wild animal. A light and manageable shotgun defined by its easiness and instinctive swing, it’s perfect for moving around in intricate forests. Another adventure companion of mine is the side by side shotgun, Esprit. Traditionally considered a hunting shotgun par excellence, this side by side is also available with 24-inch (62 cm) short barrels, and because of this it’s especially suitable for challenging the queen of the forest.

There are many wonderful memories related to woodcocks hunting that I carry with me. Among them there’s a meeting with an old hunter that one day said to me: “Remember that the true woodcock hunter isn’t the one you find at the local bar while he’s boasting about his kills, but the one that sometimes, fascinated by this mysterious animal, sacrifices his shot just to watch it fly away”.

Often his words come back to me, and I think that, in fact, he was right…

What counts when going hunt is enjoying the beauty of the small things: the color of the sunrises and sunsets, the smell of the forest dew, the possibility to leave routines and the day-to-day behind and take a moment for us, immersed in nature, and finally to be one with ourselves.

This is the hunt for me… Emotion and wonder”.